Nebbiolo in Its Many Guises: Alto Piemonte & Valtellina

There is no question that Nebbiolo is one of the world’s greatest and most noble red grapes. An ability to convey the essence of site and vintage through the lens of producer style places Nebbiolo in rarified company. Once consumers experience the magic of Nebbiolo – most often through the wines of the Langhe – it is only natural to ask: What else is out there? The answer is Alto Piemonte and Valtellina, two separate and distinct regions, both of which offer so much to explore. Since my last feature, two years ago, I have tasted more wines from Alto Piemonte and Valtellina than ever before, many of them from new producers. The pace of change is fast, and quite often, thrilling. Best of all, these artisan, hand-made wines remain known to only a handful of cognoscenti and offer tremendous value in today’s world. 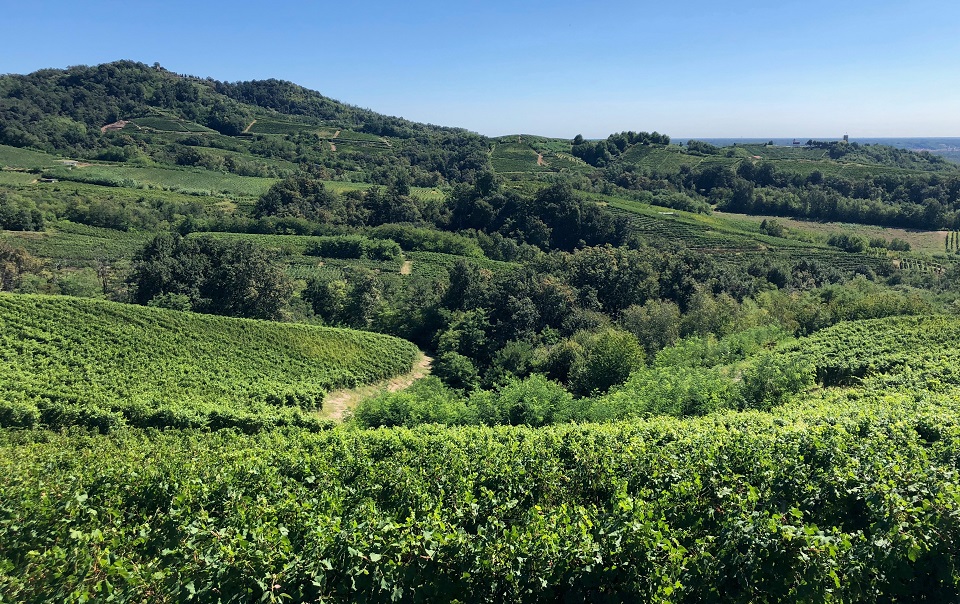 The view over Gattinara from Nervi.

Alto Piemonte is going through a Renaissance that is really exciting to watch unfold. A number of older estates are benefiting from an infusion of new energy, while a generation of young, ambitious producers are showing the world what these once-forgotten vineyards are capable of. At the same time, the vestiges of the decayed past remain visible, and that provides a window through which to look back into the region’s history.

Alto Piemonte wines experienced their first glory days in the 19th century, when Gattinara, not Barolo or Barbaresco, was the most famous red in Piedmont. In the late 1800s, Alto Piemonte entered a period of profound economic crisis. Phylloxera and the severe frost of 1905 devastated vineyards. Later, the growth of industry and the promise of a steady income at nearby factories began luring property owners away from far less lucrative and unpredictable work in the fields. Even today, decades later, abandoned vineyards are visible, buried beneath shrub and forest growth that speak to what was a massive shift from agrarian to factory work. 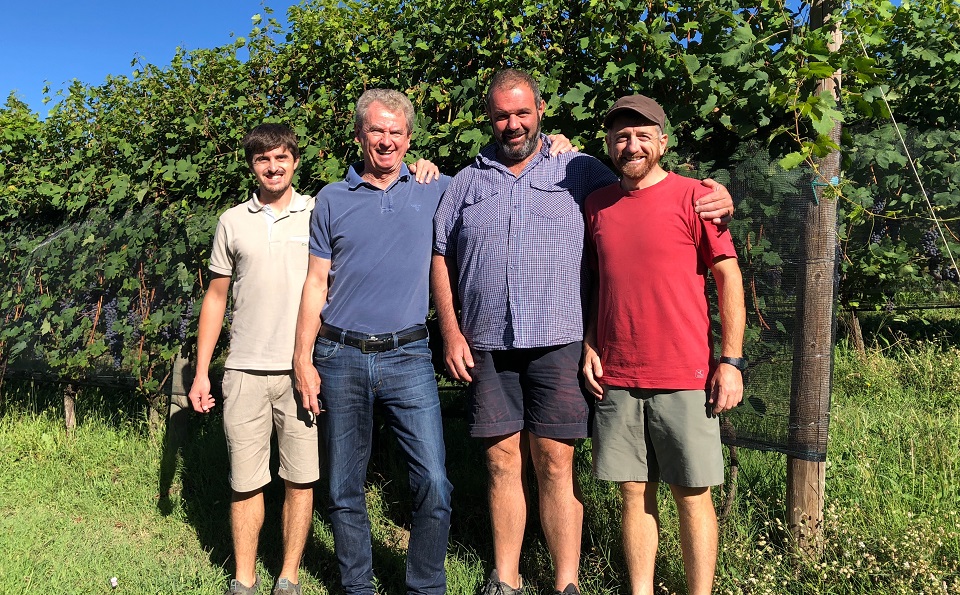 Over the last 15-20 years, a new wave of producers has brought renewed life to these vineyards, buoyed by global interest in fine wines that speak of place, something earlier generations could not count on. One of the first was Christophe Künzli, a Swiss importer with an enviable roster of producers, who fell in love with the area in the 1990s. He bought a small 0.5 hectare vineyard from Antonio Cerri, one of the historic figures in Boca, and founded Le Piane, where he now regularly turns out some of the most compelling wines in the region. Isole e Olena's Paolo De Marchi and his son, Luca, have revitalized the family's Proprietà Sperino estate in their native Lessona. Another fascinating success story unfolds in Bramaterra. Dieter Heuskel made frequent trips to Alto Piemonte when he was the Chairman of Boston Consulting Group’s Germany practice. Those weekend trips turned into a second career at Le Pianelle, which he co-founded with highly respected Alto Adige producer Peter DiPoli. The talented Cristiano Garella has emerged as the voice of the younger generation and is, along with Roberto Conterno, Alto Piemonte’s greatest ambassador. Garella makes wine at his own Colombera & Garella and at Le Pianelle, while consulting for numerous other wineries. These producers, among many others, are the face of Alto Piemonte today.

But it has not been easy. Among other challenges, over time vineyards had been divided within families, such that modern estates like Le Piane and Le Pianelle have been built through the purchase of numerous micro-parcels, a painstaking labor of love. Even through these acquisitions, many estates remain quite small. That artisan dimensions brings with it a lot of charm and a distinctive personal quality that makes the best wines so compelling, but also translates to a lack of scale and visibility that can be a challenge in a globalized world.

Roberto Conterno’s purchase of Nervi, the oldest winery in Gattinara, in 2016, brought a level of attention and renewed interest that continues to reverberate throughout the region. Conterno is in the process of finishing a brand-new winery with a small restaurant, that is sure to become a major attraction. On that subject, Alto Piemonte has something most wine regions can only dream of, and that is close proximity to a major international airport at Milan Malpensa. It may be difficult to think about travel as the world grapples with COVID-19, but Alto Piemonte is very well set up for the future. Readers looking for an off the beaten track wine destination that is not jammed with visitors will find so much to explore in these small towns and villages. 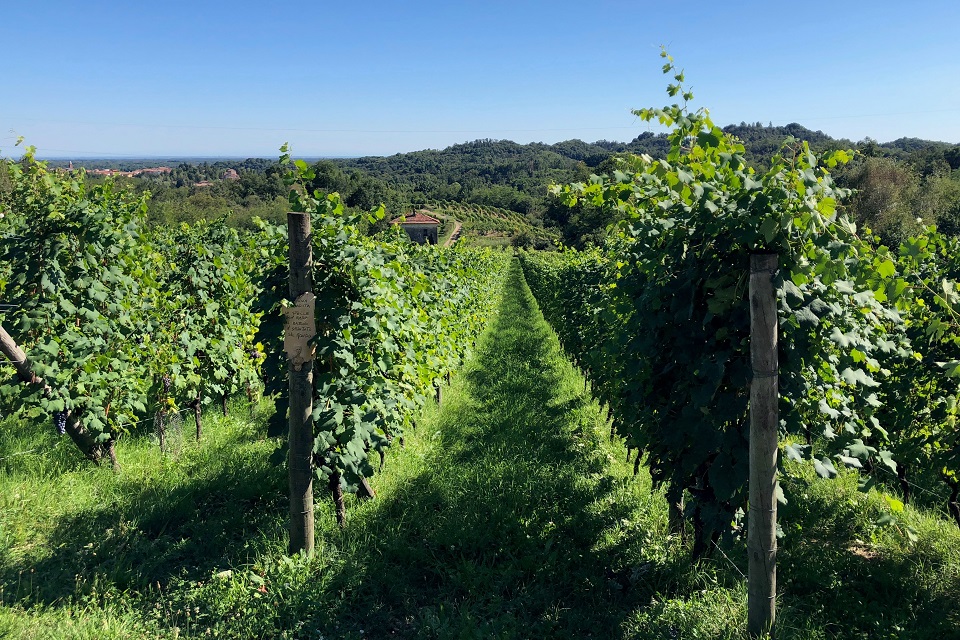 One of many small plots that comprise Le Piane, Boca.

Alto Piemonte – At a Glance

Alto Piemonte is a collection of D.O.C. and D.O.C.G.s in the provinces of Vercelli and Novara, and includes the denominazioni (or appellations) of Lessona, Bramaterra, Gattinara, Sizzano, Fara and Boca, roughly from west to east. Each of these appellations is defined by slightly different terrains, along with distinct production guidelines. Nebbiolo is the main red grape, but it is often blended, unlike further south, in the Langhe, where Barolo and Barbaresco are made with 100% Nebbiolo. Last, but certainly not least, is the tiny D.O.C. of Carema, which is in the province of Torino and not technically a part of Alto Piemonte, although the Nebbiolos from these sites clearly bear many similarities to those of Alto Piemonte.

Nebbiolo, known locally as Spanna, reigns supreme in Alto Piemonte and is the main grape in all of the region’s appellations. In the Langhe’s prestigious Barolo and Barbaresco production zones Nebbiolo is found alone, but in Alto Piemonte, Nebbiolo is almost always blended with other indigenous varieties such as Vespolina, Croatina and Uva Rara, which results in wines that can be quite complex and multi-dimensional. Although each of Alto Piemonte’s appellations is distinct, we can observe that Nebbiolo and Nebbiolo-based reds from Alto Piemonte are generally finely sketched, somewhat slender wines with more of an acid-driven nervosity than is found further south in Barolo, Barbaresco and Roero.

Vespolina is most often seen as a complement to Nebbiolo in many Alto Piemonte wines. In recent years, a small number of growers have begun to bottle Vespolina, which gives us an opportunity to see how the variety behaves on its own. Most Vespolinas are intensely floral, savory and lifted, with more of a dried (rather than fresh) fruit character and mid-weight structure.

Croatina is known for its deep color and intense dark fruit. Croatina is another variety that is most often seen as a complement to Nebbiolo in Piedmont (and also Corvina in Veneto), but that is increasingly bottled on its own. The best Croatinas I have tasted are fleshy, beautifully resonant, layered wines.

Uva Rara, also known as Bonarda, is commonly used as a blender with Nebbiolo. The wines are described as fruity, floral and a touch bitter, although I don’t think I have ever tasted a pure Uva Rara in Piedmont. 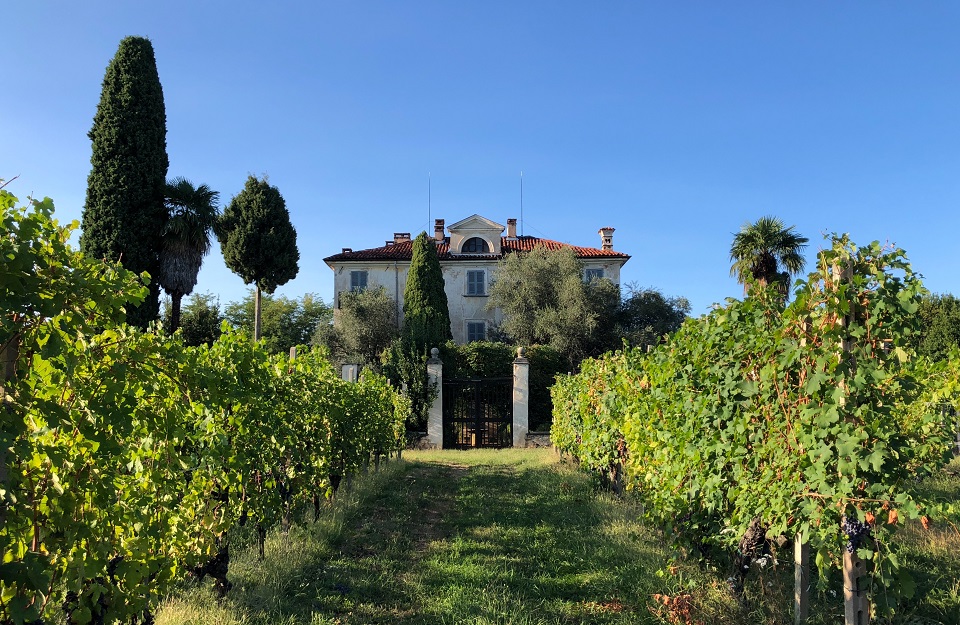 Alto Piemonte's landscape is marked by an extraordinary diversity of sites and a rich mosaic of soils, many of them of volcanic origin, especially in Gattinara, Boca and parts of Bramaterra. Lessona, to the west of the appellation, is characterized by alluvial deposits that have accumulated over time. Younger soils along the Sesia River are found along the strip of land that encompasses Ghemme, Sizzano and Fara. The influence of soil alone in understanding these wines is not always easy to perceive given the variation permitted in blends, as described below. 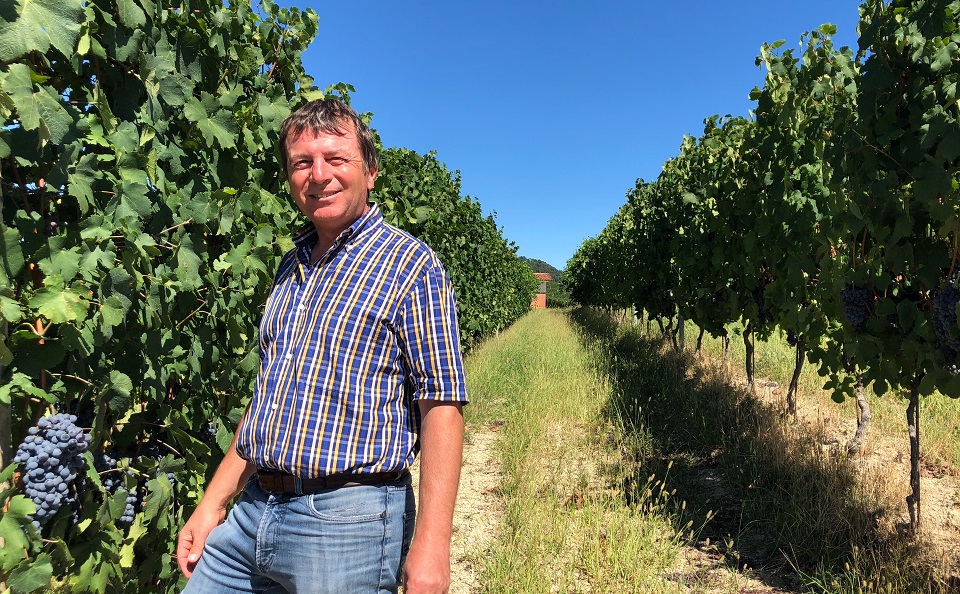 Roberto Conterno at Nervi sampling grapes ahead of the 2018 harvest. 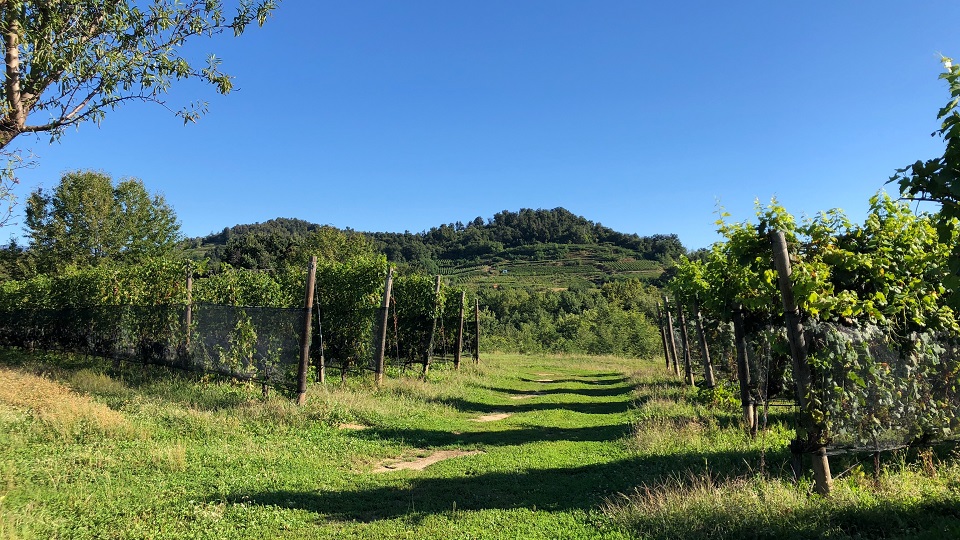 Le Pianelle, Bramaterra, where old, heritage vineyards have been brought back to life.

Relative to the Langhe, Alto Piemonte is cooler and sees more rain, but the vintages more or less share the same personalities. For wines in this article, the 2014s are nervy, taut wines that reflect the cool, wet growing season, while the 2015s are more radiant and full in body. The 2016s see a return to more even conditions that produced wines of notable fragrance and elegance. Dry, warm weather yielded forward, juicy wines in 2017. Like the Langhe, Alto Piemonte has benefitted from climate change, which has given the wines more fruit and overall depth, with less of the youthful austerity that was once such a signature.

The vineyards of Sassella moving towards Sondrio, as seen in Valtellina Superiore and its Subzones, by Alessandro Masnaghetti, ©2015. Used with permission.

Valtellina – At a Glance

Nebbiolo finds entirely different shades of expression in Lombardy’s Valtellina, a thin strip of steep, terraced vineyards above the Adda river that has the town of Sondrio as its center. Known locally as Chiavennasca, Nebbiolo in Valtellina is capable of striking wines endowed with real personality. Ar.Pe.Pe, Fay and Prevostini, among others, make compelling wines that give readers plenty to discover. A few months ago, I served an Ar.Pe.Pe. Sassella next to the best of Burgundy and Piedmont at a charity dinner, and it showed beautifully. I was not at all surprised. The best wines of Valtellina can hold their own alongside long-established benchmarks. In my view, Valtellina is a region with tremendous potential, especially as the world furthers its love affair with Nebbiolo.

The heart of Valtellina unfolds in the districts of Sassella, Grumello and Inferno, which produce many of the most pedigreed wines of the region. Valtellina reds are medium-bodied in structure and aromatically penetrating, especially those grown in some of the higher-altitude sections. Of the three main subzones, Sassella has a reputation for producing the most elegant wines, while Inferno is known for its richer, more enveloping reds. I am not sure those distinctions always hold as much as one might like them to, but there is no question that the finest Valtellina wines are deeply intriguing. 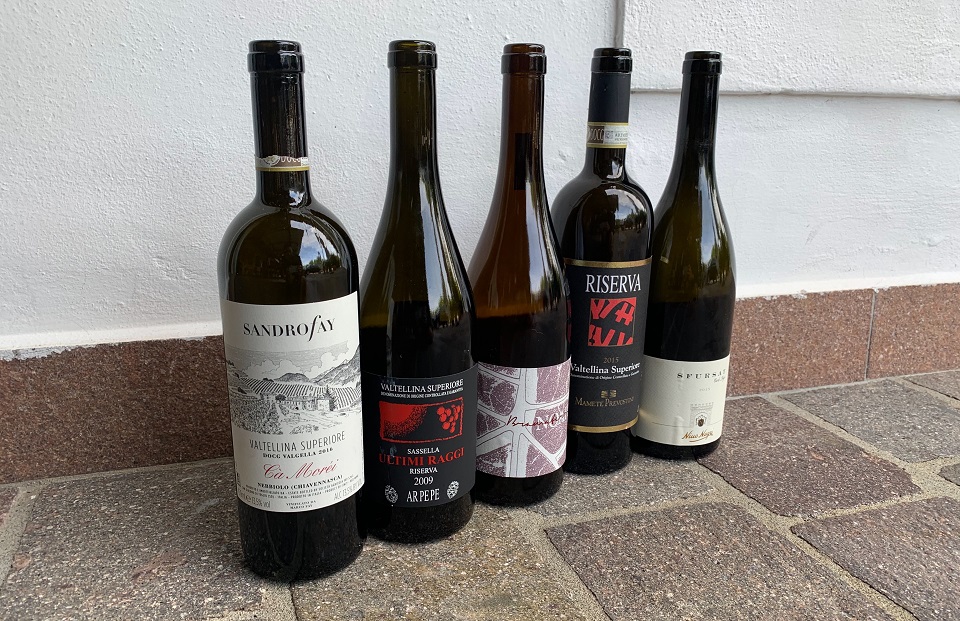 A few highlights from recent tastings of Valtellina reds, and one interloper.

Whereas in Alto Piemonte each appellation has its own specific production guidelines, Valtellina is organized into a clear hierarchical qualitative pyramid of appellations that consists of the entry-level Rosso di Valtellina D.O.C., six D.O.C.G.s – a straight Valtellina Superiore plus the six subzone Valtellina Superiore D.O.C.G.s of Maroggia, Sassella, Grumello, Inferno and Valgella – and the top-of-the-line Sforzato D.O.C.G. The varietal mix for all of Valtellina’s D.O.C./D.O.C.G.s is the same: 90% Nebbiolo and up to 10% other authorized red grapes. Naturally requirements with regards to yields, alcohol levels, aging and other variables become more stringent as one moves up the quality ladder.

Sforzato sits at the pinnacle of the quality pyramid in Valtellina. For Sforzato, the fruit is air-dried, Amarone-style before it can be legally crushed starting on December 10 following the harvest. That approach yields robust wines with the aromatic nuance and structure of Nebbiolo, but a level of textural richness that leans in the direction of Amarone without being as overt as those wines can be. The technique of drying grapes dates back to a time when full ripeness was hard to attain in what where then marginal climates. Today, in our climate change-influenced world, growing ripe grapes no longer entails the struggle it once did, and Sforzato seems a bit out of date. That is especially true of wines that are also lavished with a fair amount of oak.

Sadly, production for Valtellina’s reds is tiny, which means they will almost certainly remain of interest and accessible only to the most passionate of Italophiles. In a world where nothing is really private anymore, a little secret is not such a bad thing after all.

I tasted most of the wines in this article between August 2018 and November 2019. Much of the reference-point material in this report is taken from my article The Last Frontier: The Nebbiolos of Alto Piemonte and Valtellina, published in June 2018.