Tokaji is one of Hungary’s greatest gifts to the world. Such is its importance to Hungarians that it’s even mentioned in “Himnusz,” their national anthem, which has lyrics translating as: “Let nectar’s silver rain ripen the grapes of Tokaji soon.” (That’s like “God Save the Queen” namechecking a pint of ale. Or maybe it does in one of the later verses that nobody remembers?)

I was recently sent the latest release, the 2017 vintage, from the Royal Tokaji Company, and I arranged a Zoom tasting with winery director Zoltán Kovács, who joined the company in that same year.

“The 2017 vintage comes after 2016, which was also good for Aszú berries, but completely different,” Kovács told me. “The growing season began with snow, and step by step we had higher temperatures. Rain fell until the end of April, then flowering took place under favorable conditions despite outbreaks of rain. A good amount of water accumulated in the soil, which is a key factor for the vintage. Summer saw even temperatures. August was quite hot (30°C), which helped the ripening, but there were no heat spikes like in 2018. There was a bit of rain in late August and September. For the early-ripening grape varieties such as Kabar, we started the Aszú berry picking on September 1, followed by the first selections of Furmint and Hárslevelú. October brought three weeks of very good weather when the quality of botrytis was excellent for the third picking. Then we finished the harvest in mid-November. We pick the berries when they are more desiccated compared to Sauternes, so we need more periods of dry weather.”

The 2017 vintage is the first where Kovács had complete control of the wine, tweaking the modus operandi in both vineyard and winery.

“There have been changes to maximize botrytis rather than just waiting for it to happen. The 2017 vintage was our largest-ever Aszú berry harvest from our own vineyards. We lowered yields to obtain riper fruit by pruning harder early in the season and carrying out a vigorous green harvest in July. We are now much more focused on picking Aszú. Even where there might not be a large amount, we will go in and pick instead of waiting to see if more will appear. It is important to spend time in the vineyards. As you inspect the bunches, any botrytis is transferred by your hands and fingers and spreads through the whole bunch.” 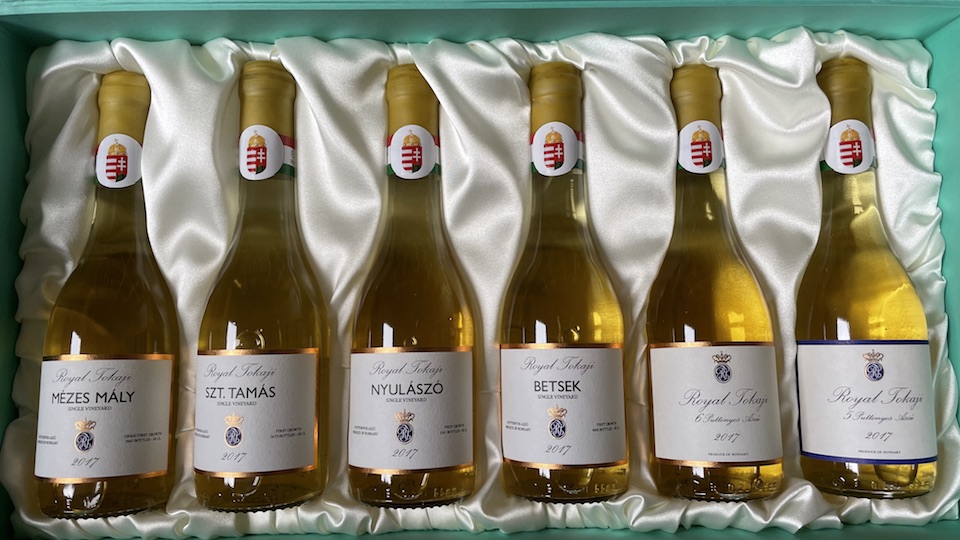 Then I asked about the vinification, because having already tasted the 2017s, I saw clear differences compared to the 2013s.

“For the Blue and Gold Label Tokaji we use Hárslevelú grapes. There is a one-and-a-half to two-day maceration inside the press, which we rotate to soak the Aszú berries before we commence the actual pressing.  The berries ferment together with the must so that the skins are penetrated. It is crucial to have very good Aszú berries. We leave the wine to finish the fermentation in tank, which takes about three or four weeks, and stop it by cooling down the must and adding SO2 to kill the yeast.”

“For the single-vineyard cuvées, we changed things a little. After pressing, the must now goes directly into barrel instead of stainless steel, and we finish the fermentation in 300- and 500-liter barrels. It takes a bit longer, but it’s much more even. Sometimes we need to raise the temperature of the room [to avoid any stuck fermentation]. The wine is then racked, treated with SO2 and returned to the fine lees for two years. The fine lees give stability, meaning we can use less SO2.”

I was very impressed by these 2017s, more so than the 2013s, especially with respect to the four Single Vineyard cuvées. They possess much more depth, richness, complexity and vibrancy, a testament to the practices that Kovács has introduced. I did inquire about the possibility of an Eszencia, and learned that the next release will be either the 2009 or the 2016, as Eszencia takes time to make. I also asked about the current market for Tokaji. Kovács reported that sales in the United States are 60% ahead of where they were in 2019, particularly in Florida, where consumers seem to have a taste for Tokaji. If you appreciate one of the world’s greatest sweet wines, then these 2017s from the Royal Tokaji Company come highly recommended. They will be tempting in their youth, but you can bet that they will age effortlessly in bottle.