Rheinhessen and Nahe 2015: Cool Concentration from a “Warm Vintage”

As I noted in my earlier reports on vintage 2015 in Riesling Germany, the Rhine growing regions effectively experienced two vintages this year: one for those who harvested most of their fruit in September, and another for those who were able, like their colleagues on the Mosel, to postpone the majority of picking until well into October, or even into November. 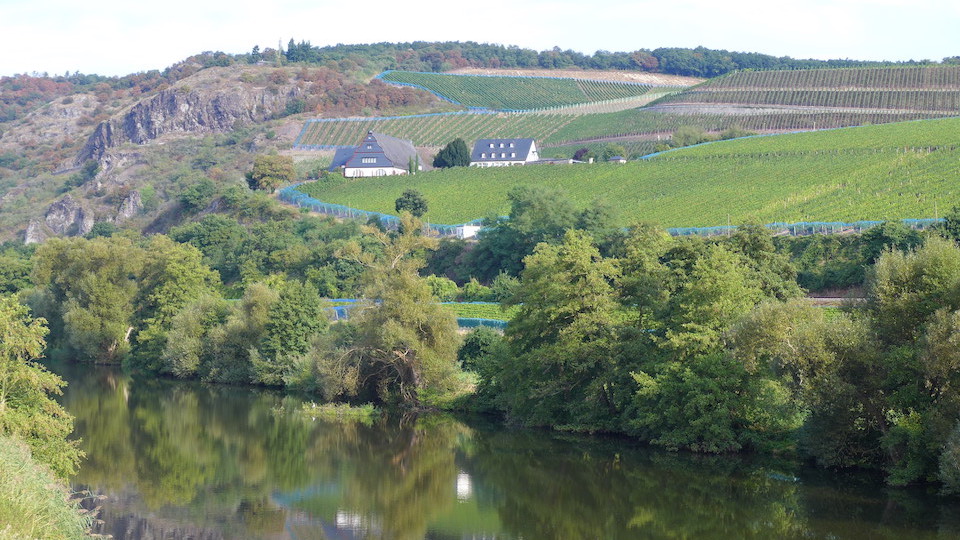 Since 2010, Gut Hermannsberg, the former Nahe Staatsdomäne housed in the Schlossböckelheimer Kupfergrube (one of three estate monopoles), is restoring its great vineyards and rendering Rieslings worthy to stand alongside those of the amazing Upper Nahe trio Dönnhoff, Emrich-Schönleber and Schäfer-Fröhlich

In the red Permian sandstone “Roter Hang” of Nackenheim and Nierstein – famous precisely because these steep slopes consistently ripened Riesling in an era when other sectors routinely experienced several deficient vintages each decade – picking in 2015 was generally completed before the second week of October. The results I tasted were largely excellent, but if you ask Klaus Peter Keller, his limestone-rich home vineyards in the Wonnegau had a meteorological advantage vis-à-vis his parcels in Nierstein. “We got nights with zero degrees Celsius beginning around the 10th of October, such as were lacking in 2014,” he related, “which turned the 2015 harvest into a chilly delight [kühlen Vergnügen]. On the morning of October 14 it started snowing, and after that the nights were 0° or -1° C. In the mornings, you could barely feel your fingers while picking.” Keller thinks he hasn’t had a more successful vintage. 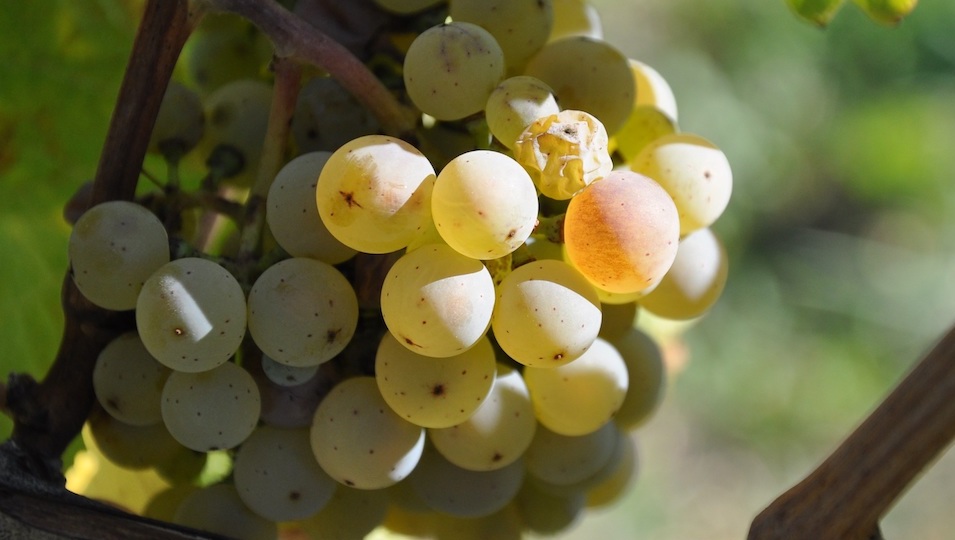 Subtle, wind-borne late September desiccation of just a few berries in each healthy bunch, reports Daniel Wagner, had “[an] effect nothing short of remarkable” in concentrating ripe acidity and aromatics

Like adjacent stretches of the Nahe, Daniel Wagner’s northernmost and highest-elevation sector of Rheinhessen was blessed with some well-needed rain in mid-August, but received less September rain than did most German Riesling-growing areas, and experienced what fell as largely beneficial. “Around the 20th of September,” Wagner told me, “we started experiencing this dry, cool breeze that lasted for two weeks, and the effect on our grapes was nothing short of remarkable.” The subtle desiccation of just a few berries in each completely healthy bunch led to a concentration of ripe acidity that kept pace with the accumulation of sugar and aromatics, as temperatures in October went from cool to downright chilly. “We didn’t even begin harvesting until September 28,” reported Wagner. “The same day, friends in the Pfalz were finishing up picking their Riesling Grosse Gewächse.” But even cooler portions of Rheinhessen had their share of early harvesters, even if growers whom I routinely visit were not among them.  “It’s largely a matter of growers wanting to play it safe,” observed Klaus Peter Keller in – for him – a familiar refrain. Especially when the latest vintage follows on the heels of one that was cool and rainy, growers tend to hedge and de-leaf aggressively, like generals wanting to fight the last war.  But that approach left fruit unprotected from the severity of summer 2015.

Most growers who got past early October reported a remarkably relaxed harvest thanks to the continued clear skies and fruit-preserving ice-box temperatures. But late picking nevertheless demanded selectivity. Fortunately, much of what needed to be picked out was lovely but simply too high in must weight to benefit dry wine, or else was felicitously botrytized. For many Rheinhessen Riesling growers, the upshot was an unprecedented array of nobly sweet wines. “Unprecedented,” granted, implies a wide range of results. For Daniel Wagner it meant a trio of Auslesen; for Philipp Wittmann twice that number, plus a TBA; while Keller chalked up more than a dozen such elixirs, albeit many in very small volumes.

Thanks in large part simply to their region’s general tendency to ripen Riesling later than do other Rhine sectors, most Nahe growers experienced the rain that fell in September as entirely beneficial. It came in time to relieve drought stress that had affected younger vineyards. But it fell on fruit insufficiently ripe for there to have been any serious concern that water pumped into thin-skinned berries might cause them to rupture. September temperatures were moderate, but even so, by mid-month growers were recording emerging botrytis, and by late that month, most had begun harvesting, or at least started culling botrytis-affected bunches. Happily, most of their crop was able to hang through the crisp, clear days of October. “Even allowing for shut-down, the hot summer served for fundamental ripeness,” observed Frank Schönleber, “whereas late September and then October were what really built aromas.” “We had excellent sugar and acid levels well before mid-October,” remarked Tim Fröhlich, “but not phenolic ripeness. For that,” he suggested, echoing Keller, “you need to have cold nights. Plus, I’m also a big fan of postponing picking as long as the foliage is still green.” 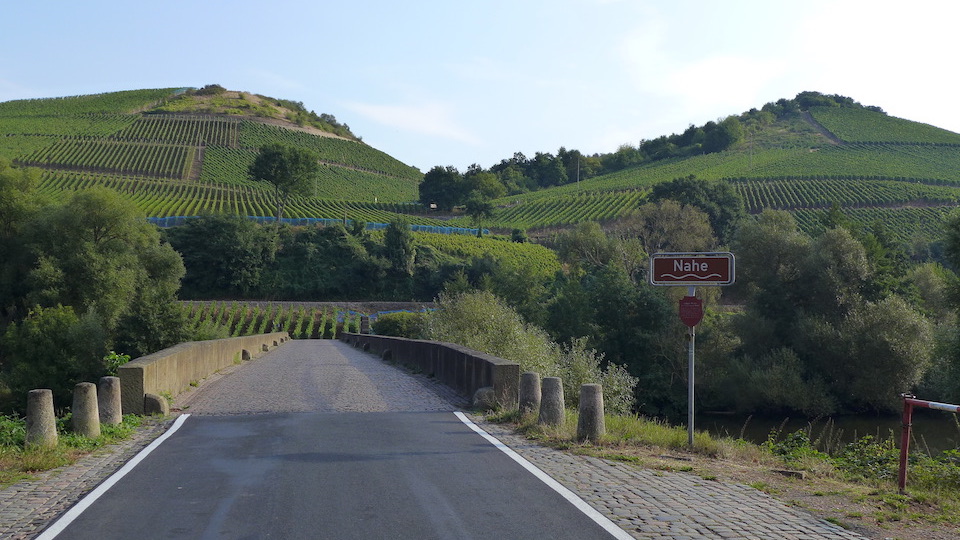 Brücke, Hermannsberg and Hermannshöhle – a Nahe sector from which emerge not only Helmut Dönnhoff’s most renowned Rieslings but also increasingly excellent Hermannshöhle  from Jakob Schneider and superb Hermannsberg from the eponymous estate (once famous as the Nahe Staatsdomäne)

The dry and off-dry Nahe Rieslings of 2015 boast delightful animation as well as alcoholic levity and transparency to nuance. But, as Fröhlich pointed out, that is not incompatible with “inner density [Dichte].” And while residually sweet Kabinetts are likely to boast Spätlese-like flavors of ripe or tropical fruits, these are accompanied by genuine buoyancy, while Spätlesen retain the invigorating quality more often associated with Kabinett, “a combination that is by no means possible most years,” according to Helmut Dönnhoff. There was a considerable volume of nobly sweet Nahe Riesling, too. “The September rains give botrytis a bit of a boost,” reported Karsten Peter of Gut Hermannsberg, echoing the experience of fellow Nahe growers, “but what little there was early on subsequently dried up superbly, becoming our auctioned Auslesen and the Trockenbeerenauslesen while what developed toward the end informed our ‘normal’ Auslesen.”

As fine as the collective 2015 results were at those Nahe addresses I visit, I once again remind readers how exciting are their 2014 counterparts, whose virtues were widely, unfairly and unfortunately neglected among critics, tradespeople and Riesling lovers generally. “Two thousand fifteen is really lovely,” remarked Georg Rumpf, “but sometimes growers do even better work when they have the Sword of Damocles hanging over their heads,” as those in Riesling Germany certainly did in 2014. “Look,” said Helmut Dönnhoff, “the years in which harvest goes really smoothly are also usually qualitatively excellent, and in 2015 it was like in a school book illustration: ‘this is how ripe Riesling grapes are supposed to look.’ But that correlation doesn’t always pertain. Sometimes, in years when you really had to struggle during the harvest – and 2014 is among those – one is skeptical about one’s results, but those children turn out much lovelier than anticipated. And maybe those from easy vintages are in the end not quite as lovely as one led one’s self to believe.” As for aging potential, I would by no means assume that the best 2015s will have the edge vis-à-vis those of 2014. 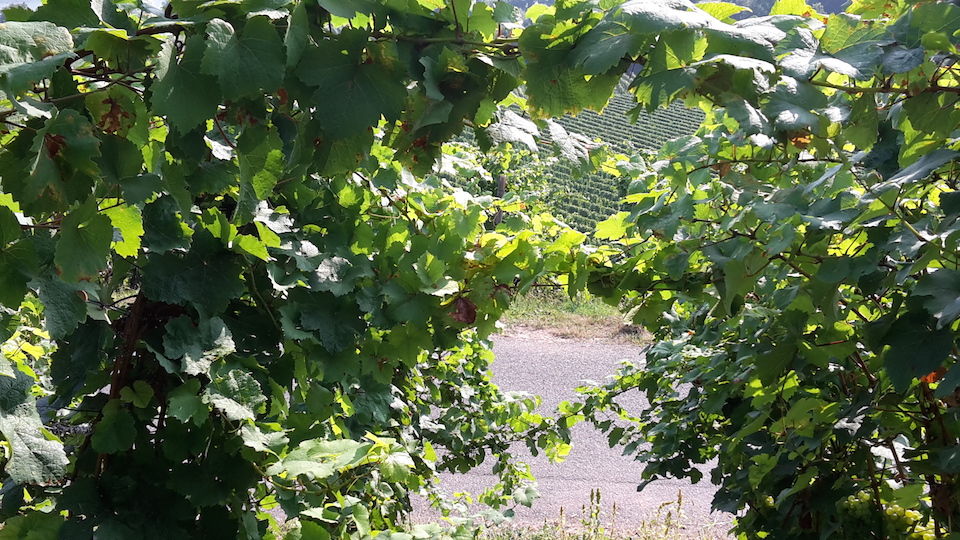 Along with Kai Schätzel, Klaus Peter Keller has spearheaded a Rhine Riesling Kabinett revival with delicate and expressive results from the Pettenthal and Hipping. The canopy “management” best suited to this style is, says Keller, “a jungle” (here in upper-reaches of Hipping)

This report is based on my September 2016 visits to 26 Rheinhessen and Nahe growers, supplemented by subsequent stateside sampling. Wine descriptions and scores follow conventions on which I have elaborated in introductions to previous Vinous reports on German Riesling, but a couple of points are worth further clarifying, since they apply to numerous wines in this report. First, since some German vineyard names do not have a single official spelling, I always follow the spelling employed by the grower. That is why, for instance, you may encounter wines in this report described as “Niersteiner Pettental” as well as ones attributed to “Pettenthal” (with an “h”). Secondly, permit me to clarify the inclusion of some wines to which I assigned a score of 86 points. While 87 is generally my cut-off for wines meriting a published tasting note, an exception is made in the following circumstances: the wine’s low price renders it a good value; the wine’s ubiquity in the marketplace means readers might well find themselves drinking it, or at least get asked about it; the wine’s high reputation prompts high expectations, in turn justifying an explanation of my disappointment.