The outlines of 2017 on the Saar are already familiar from my earlier reports on Riesling Germany in this vintage. A turbocharged spring rendered precocious buds vulnerable to a hard, widespread April 20 frost that, in the worst instances, killed off 30–40% of them. After that, the weather was dry and warm – at times hot – until the end of July, at which point the Saar, unlike certain stretches of the Mosel, got just enough precipitation to stave off drought stress or reactivate vines that had shut down. Must weights rose rapidly in response, while phenolic and aromatic evolution lagged by comparison. Sporadic September rain led to unwanted botrytis in numerous locations. Vine and soil management, along with vine genetics, largely determined how much of a problem rot proved to be. A cumulative effect of the aforementioned factors – precocious start, low yields, warmth, water in the nick of time but then with some attendant botrytis – led most growers to launch their earliest-ever Riesling harvest (though vintage 2018 was to blow past those records). Fortunately, cool September and early October weather slowed the spread of botrytis, and the Saar benefited from its usual slightly lower temperatures and breezier, more open landscape than in the Mosel proper. In the more difficult instances along the Mosel, what got picked early in the face of encroaching rot could exhibit shrill acidity and borderline ripeness, while what got picked not that much later, though less acidic, was concentrated by not entirely noble rot. However, neither extreme was in evidence among the 13 Saar collections that I tasted.

Striking features of the 2017 Riesling vintage were high acidity and high – often freakishly high – levels of dry extract. The high acidity is surely a result of early harvest and cool September weather, in some instances compounded by vine shutdown during the height of summer heat. Among the Saar growers I visited, deacidification appears to have been rare and confined to musts destined for generic bottlings. At some addresses – including ones where this is not usually the case – dry wines were allowed to undergo malolactic transformation, and the drops in total acidity recorded in such instances testify to musts having harbored high levels of malic. As I have discussed in previous reports on this vintage, the high levels of dry extract – which, being in large part potassium, helps buffer out the vintage’s often high acidity – are not easy to explain. Most growers, having experienced serious crop loss due to frost, associate them with low yields. But those few sectors or vineyards that were left largely unscathed by frost – on the Saar, for instance, von Hövel’s in Oberemmel or Zilliken’s in Saarburg – rendered Rieslings with similarly extreme extract levels. And a dry, warm summer typically correlates with low extract: think of this as a case of less solid matter being deposited in grapes due to less water circulating through the vine. 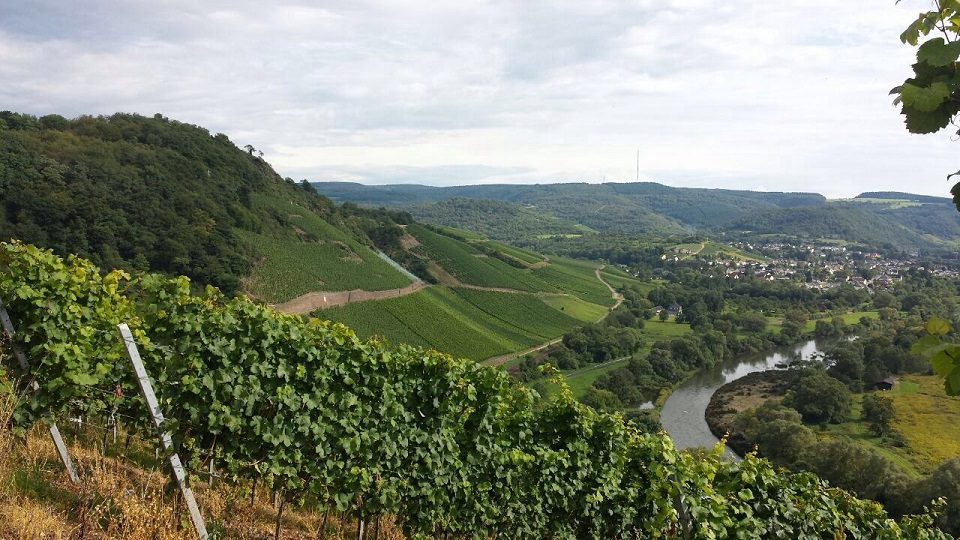 Wiltingen's Braune Kupp and Gottesfuss (in the foreground) were, in 2017, once again sources for memorable Rieslings in dramatically different styles from Egon Müller's Le Gallais and Roman Niewodniczanski's Van Volxem.

Nervous at Their Best

There is a delightful sense of nervous energy and spine to many of the Saar 2017s. But by striking contrast – and sometimes at one and the same address – those that underwent malolactic transformation can tend toward soothing gentleness. Concern for the health of grape skins rather than any need to enhance acidity led most growers to press gently, and some of the more quality-conscious painstakingly separated the juice according to when it flowed (“press fractioning” is the term of art), dumping or selling off whatever required greater pressure to extract. The same concern led most of those who employ pre-fermentative skin contact to limit or eliminate it in 2017. Notwithstanding the influences of direct, whole-cluster pressing, reduced skin contact and malolactic transformation, one occasionally encounters a touch of roughness and rusticity from Saar Rieslings of this vintage, which may have as much to do with high levels of malic acidity (or, in the case of wines that underwent malolactic conversion, the “memory of malic”) as with phenolic content.

Thanks to the cool autumn and the completion of harvest by mid-October at most addresses, the dry wines are very seldom alcoholically freighted. But brilliant, lower-alcohol Kabinetts are a relative rarity, and dependent on both a viticultural regimen and vine genetics optimally conducive to achieving early ripeness of flavor, not to mention on grapes being in rude good health. More typical of the vintage are wines from musts in the upper 80s to lower 90s Oechsle, as such fitting what has since the late 1980s been taken to correspond to Spätlese or “lighter” Auslese. I like the way Veronika Lintner at Egon Müller’s Scharzhof described 2017’s combination of high ripeness, high extract and high acidity as having conduced to “relatively muscular, weightier wines than in 2016, [a year] when they were unusually slim and filigreed.” On occasion I had the impression – a much more common one when tasting Middle Mosel 2017s – of nobly sweet wines that were less successful than the corresponding Spätlesen. But there are small volumes of some superb ennobled Saar elixirs (not least, predictably, from the Scharzhof), products of painstaking selection and often picked out in September or early October. 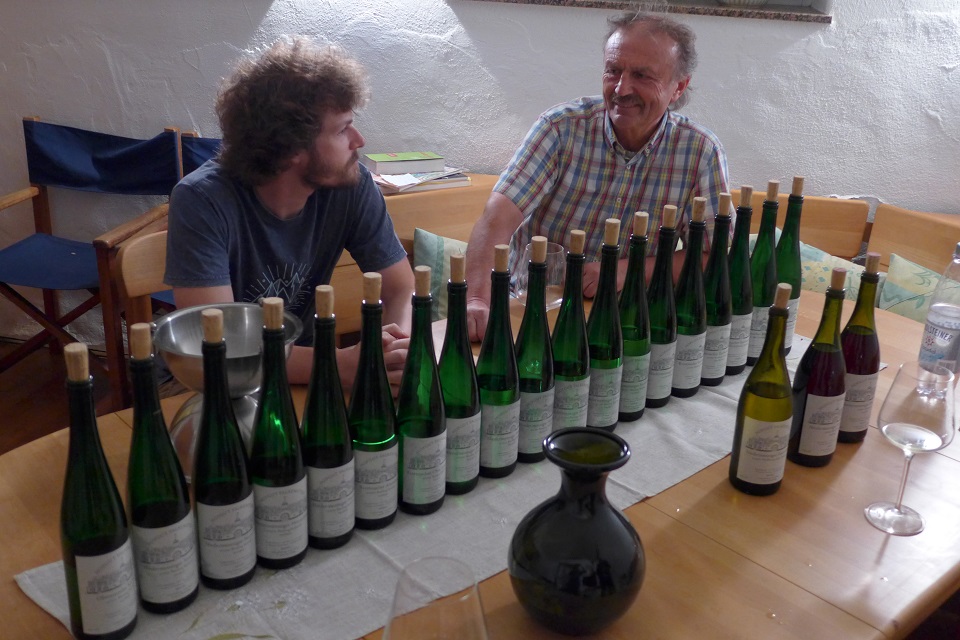 In 2017, Erich and Johannes Weber of Hofgut Falkenstein achieved a memorably successful collection whose wealth of low-alcohol dry Rieslings are reminiscent of earlier eras in both this estate's history and, if one goes back 120 years, the history of Saar as a whole.

The 2017 vintage is less consistent in quality on the Saar than was 2015, and the high points of 2016 remain, on the whole, more impressive, at least at this early stage, not to mention more quintessentially Saar in their combination of steely frame with delicacy and refined flavors. But there are lots of vintage 2017 gems that no lover of Saar Riesling should miss. Given such a wide range of finished acidity and botrytis influence, compounded by a range of picking strategies and vinification regimens in the face of unprecedented conditions – extremely high must weights already in September, but coinciding with high acidity and extract – it is even harder to generalize about ageability than about vintage character. The more focused and energetic residually sweet Saar Rieslings should have a good run in bottle. Track record should never be underestimated in determining what to lay down, but in instances where the 2017s of a given Saar estate represent a significant stylistic departure from the typical wines at that address, then most bets are off. This is definitely a vintage from which to monitor rather than forget the wines in your cellar!

My report is based on visits with a dozen Saar growers between late August and mid-September 2018, supplemented by subsequent stateside assessment of samples, including some from a 13th estate. I remind readers that growers are grouped in my reports according to winery location, so this one omits the extensive and important Saar Rieslings of Markus Molitor, Reichsgraf von Kesselstatt and Nik Weis (St. Urbans-Hof), which will be reviewed as part of my impending coverage of the Middle Mosel and Ruwer. Disappointingly, I was once again unable to schedule a visit at Weingut Dr. Wagner, and I was surprised when I visited Nik Weis’s St. Urbans-Hof to be told that the 2017s of Weingut Dr. Fischer, which since 2014 has represented a collaboration with Martin Foradori, were not available for tasting, the stocks allegedly residing entirely at the latter’s facility in the Alto Adige. I subsequently noted that Dr. Fischer has been dropped from the VDP’s online register, and I shall try to get to the bottom of that matter and share what I find out. Conventions regarding nomenclature and scoring are those followed in my previous reports and detailed in the introductions to my coverage of vintage 2015 and 2014 German Rieslings. I reference A.P. (official registration) numbers only where this is necessary to disambiguate two otherwise eponymous wines, and the registration number is assumed to be that of the year following the vintage, unless otherwise indicated. (Nowadays, many growers associate the same registration number with a given wine vintage after vintage, though some assign these numbers chronologically based on harvest or bottling dates, and a few observe more creative conventions. Hanno Zilliken, for instance, allocates numbers based on pecking order, so that what he considers the top wine of any given vintage becomes A.P. #1, and so on down the qualitative line.) I only rarely review a wine I rated 86 points or lower, but I make exceptions in instances where such a wine represents good value, or a disappointment about which I think readers deserve to know in detail.

Vintages of Paradox & Mystery: A Preview of 2018 and 2017 in Germany and Austria, David Schildknecht, January 2019