The texts started coming in over the weekend. Jim Clendenen had passed away. I was in shock. We had a tasting scheduled in two weeks. Surely this was some sort of mistake. Sadly, those early reports turned out to be true.

I couldn’t believe it. I still can’t. That’s the reason this article is appearing much later than we usually publish similar pieces. I just didn’t want to write it, to be perfectly honest. And the reason is that I knew doing so would be an acknowledgement that Jim Clendenen was no longer with us. So, I put it off for a few weeks while I collected my thoughts.

It’s hard to overestimate the influence Jim Clendenen and his Au Bon Climat winery had on the Santa Barbara wine scene in its early days. Au Bon Climat put Santa Barbara on the map, literally, with brilliant Chardonnays and Pinot Noirs that showed the potential of Santa Barbara to a whole new generation of wine lovers around the world. The wines brought fame to vineyards like Sanford & Benedict and Bien Nacido, and especially the old vine parcels in those sites that have since become so coveted.

Jim Clendenen started his career at Zaca Mesa before founding Au Bon Climat with Adam Tolmach in 1982. Deeply influenced by their love of Burgundy, Clendenen and Tolmach set out to make wines of place. Clendenen and Tolmach ultimately parted ways in the late 1980s. “We just had different visions of where we wanted to go,” Tolmach told me. “Jim was an important person in my life. He introduced me to my wife, Helen, and was a constant presence. The breakup was very hard, but about ten years later we reconciled and enjoy seeing each other from time to time.”

Jim Clendenen was a role model and inspiration to so many, from those who worked for him to others who were simply influenced by his larger than life persona. "I just assumed Jim was immortal,” Gavin Chanin explained, echoing a sentiment shared by so many wine people in Santa Barbara and California. “He was like a second father to me. I worked for him from age 18 to 27. His life was 99% wine, 1% Los Angeles Lakers. Even when he was pissed, he always had your back," Chanin added. 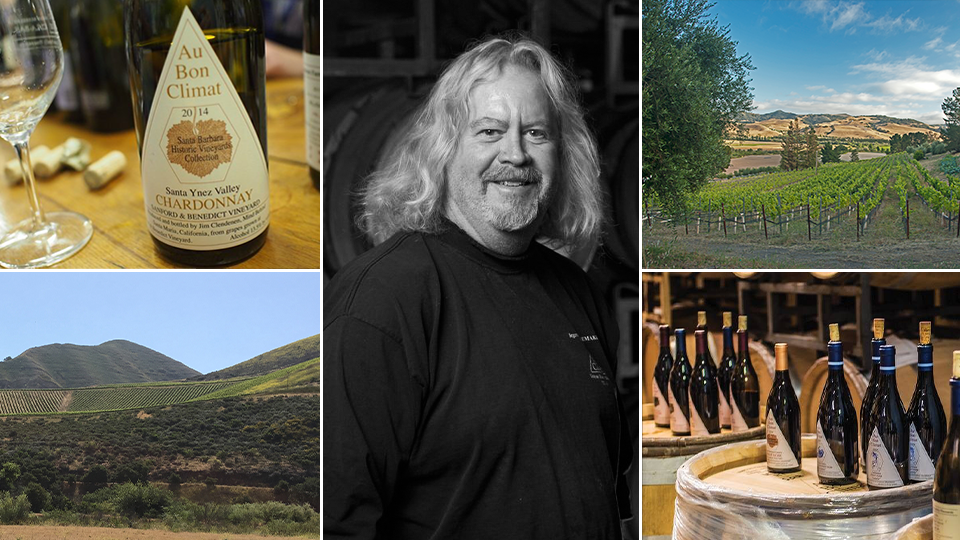 I first met Jim Clendenen in 2008 at La Pauleée in San Francisco. I was at the beginning of my career as a wine critic and writer, basically a nobody. I didn’t cover California wines at the time. Clendenen came up to me and immediately started teasing me good-naturedly about my boss (Robert Parker). “I was once a Parker darling and then suddenly I was in the doghouse, but I never changed a thing!” Clendenen vividly explained. He reminded me of this every single time I saw him after that.

I am not sure if Clendenen changed much in those years or not (the early to the mid 1990s) as I was not tasting the wines then, but the world certainly changed a lot around him the years that followed. So much so, that, as I have written, the Au Bon Climat wines are pretty opulent in the context of Santa Barbara today, whereas the wines of most of his disciples such as Chanin, Tyler and Sandhi, to name a few, are all considerably leaner. Clendenen never shied away from new oak and textural richness, especially in Chardonnay. Ironically, today, his wines stand in pretty stark contrast to those of virtually all the younger winemakers he influenced. But that is a story for another day.

“Hey, you gotta taste this..." Clendenen would often say as we ran through his wines. There was so much passion in everything he did. When I am in Santa Barbara I like to meet every producer one on one. That requires that some tastings be done in central locations where winemakers come in with their wines. Clendenen would always show up at the appointed place. No matter how much time I set aside, it was never enough. If there was anyone in Santa Barbara who could have insisted an on-site visit, it would have certainly been Jim Clendenen, but the man had no ego. He did love a good debate, though, and we had plenty of those. Clendenen’s love of all things Burgundy is well known, so I won’t repeat that here. But he was equally passionate about other topics. One of them was the potential of Nebbiolo in California. I have to admit, I have never been a huge fan, but if there was one person who could convince me otherwise, it was Jim Clendenen.

Food was another all consuming passion. Lunches at Au Bon Climat were legendary. That’s how Clendenen rolled. He had a huge zest for life. "Jim cooked lunch for all of us at the winery on Friday, as he always did. Then, on Saturday he was gone," Au Bon Climat assistant winemaker Marc Piro recounted.

Clendenen’s passing leaves a large void. He is survived by his children, Knox and Isabelle, who is involved in the winery, and a strong team at Au Bon Climat ably led by General Manager Jim Adelman. "We are carrying on, just as he would have wanted us to," longtime business partner and friend Bob Lindquist explained. "Jim was 13 days older than me. He was a huge presence in our shared winery, especially over this last year, where he was here every single day. But the pandemic was very hard on him as he really thrived on contact with the outside world."

I will greatly miss our tastings and conversations. Fortunately, we were able to speak via Zoom during the lockdown. That discussion will give readers a very good idea of who Jim Clendenen was. I am sure he is sitting somewhere in the sky with a group of winemakers with his latest creation saying: ”Hey, you gotta taste this…”

All of us at Vinous extend our deepest condolences to the Clendenen family.