Making Wine Across the Divide: A Chat with Ernst and Hannes Storm

The Storm brothers, Hannes, 39, and Ernst, 36, grew up in the Western Cape of South Africa. When they were teens, the family moved to Hermanus, which is in the famed Walker Bay appellation.

By the time Ernst got out of high school, his older brother Hannes was already toying with the notion of making wine and had enrolled in the University of Stellenbosch, where he ultimately received his degree in Viticulture and Enology. Ernst took a year off between high school and college to work in a salmon farm in Scotland, but when he returned he enrolled in South Africa’s lauded Elsenburg Agricultural School, which was founded in the 1890s. Ernst’s career includes successful stints making wine in South Africa at Amani Winery and in the Sierra Foothills of California. He later settled down in California’s Santa Barbara County, where he was winemaker at Curtis Winery while slowly developing his own brand over the past 15 years. With ten vintages of his own wines under his belt, he is now helming his own project full time. “My brother and I are people who like to work for ourselves. We like to be in charge of our own decisions,” Ernst told me recently.

Hannes left his job at the esteemed Hamilton Russell Winery in South Africa in 2012 after holding the winemaker position there for a decade. That year he established his own brand in the Hemel-en-Aarde Valley of the Western Cape. Both brothers named their projects eponymously: Storm Wines. “I think even back then, on that farm,” Ernst adds, “we both knew we wanted to do something for a living that would take us outdoors.” 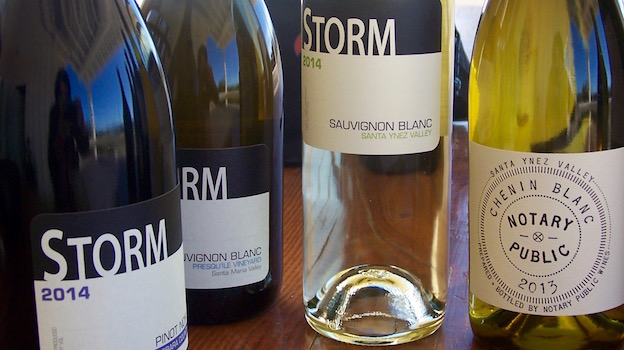 The brothers had a lot of fun growing up together, but they also had a fair amount of sibling rivalry. “One of our older sisters married a farmer, and so as children we spent a lot of time on their farm. There were sheep there. And sunflowers. Whenever we had a vacation, Hannes and I would want to go to the farm. We spent a lot of time playing there, but you know, like brothers, we’d fight, too,” says Ernst. “We got feisty with each other at times,” Hannes adds, “as we are both quite competitive.” The brothers talk almost daily now. “We talk not only about winemaking,” Ernst says, “but also about wine marketing and sales strategies – what we’ve done wrong and what we’ve done right, how to stay real and authentic in this business, how do you not follow a crowd? Hannes and I probably talk about this stuff weekly, though I think we talk on the phone almost every day. It’s a fun thing to share with your brother. And neither of us thinks you should take wine too seriously. It’s nice to talk to someone who knows there are more important things in life.” 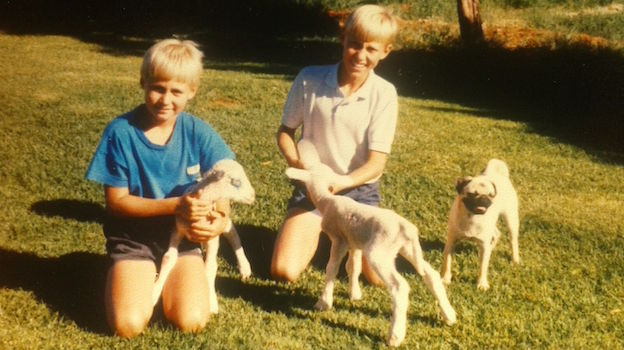 Ernst and Hannes as boys

When I ask Ernst what variety he prefers to work with, he responds, “You have to treat each wine you make like it’s the only wine you make. If you do that, it will show." And indeed it does. He has a deft touch when it comes to communicating varietal character, balance and typicity in each of the varieties with which he works. Under his Storm label, Ernst is known mostly for his restrained, lean, yet fresh Pinot Noirs and Sauvignon Blancs. Ernst also produces a sister label, Notary Public, that is known for its affordably priced Cabernet Sauvignon and Chenin Blanc. He explains the Notary Public moniker, “It represents, hopefully, the public stamp of approval. We don’t spend a lot of money marketing this brand. I keep expenses minimal. I want to build Notary Public into a brand that is very well thought-out and that grows organically, with wines that are a good value. The goal is to find vineyards with vine age and personality, and to make wines from those vineyards that are unpretentious. I want to make an every-day Cab that still has a lot of personality and reflects vintage and site. My Cabernet is not polished. There’s no added tannin or all this new oak. I want it to be a pure expression of where it’s from.” 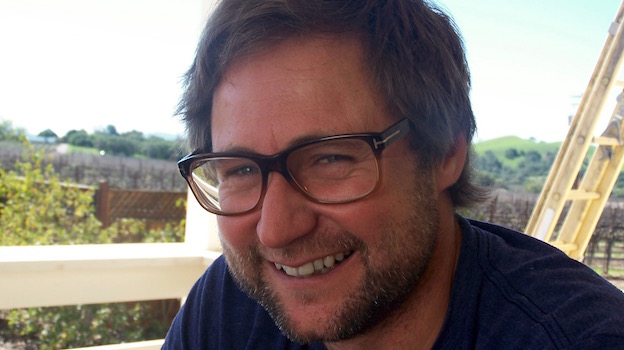 I ask him if his ego takes a hit making a $28 bottle of Cabernet Sauvignon when some of the other Cab producers in Santa Barbara are charging a lot more. “My brother and I talk about this all the time. Once your ego gets involved in anything, it’s over. I’m more interested in making sound business decisions and looking at the market out there. You have to have a long-term goal in mind and not be distracted by your ego.” 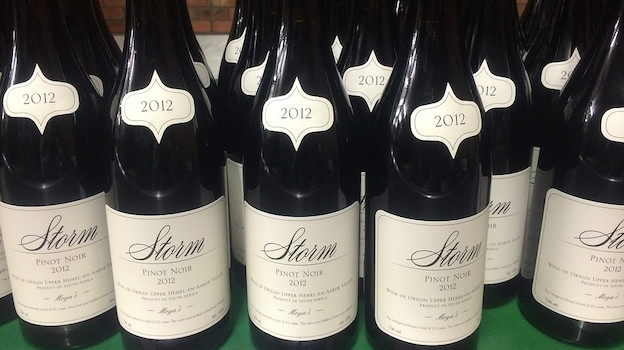 When I tasted Hannes’ wines during one of his recent trips to America, I found them to be similar to his brother’s wines with regard to approach – clearly delineated flavors, naturally balanced with vibrant acidity, nice texture and good length. Although he makes a little Chardonnay, Hannes remains transfixed by Pinot Noir and devotes 90% percent of his winemaking to this variety. An epiphany wine experience sealed his love for Pinot Noir. “I had the privilege of drinking Domaine Armand Rousseau’s 1990 Chambertin in 2000. There was no turning back!” he says. He is equally excited about exploring his winemaking future in South Africa. “South Africa is currently on a very exciting wave, with some great young new wave winemakers who push the envelope to the edge as far as a natural approach, regionality and expression of origin are concerned. It is exciting to be part of the ‘Wave’.” 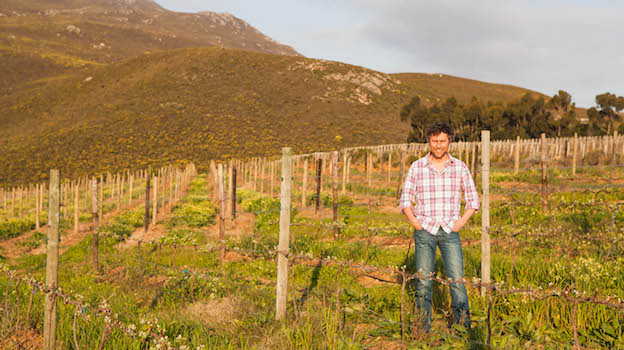 Meanwhile, the brothers help each other with their harvests. As this story goes to print, Ernst is in South Africa, assisting Hannes with his harvest. In turn, Hannes will come back to the United States late this summer to help out his younger brother. Their parents assist with both harvests. “They take huge pride in having two sons who are winemakers, especially my dad,” says Ernst. “He likes to pour our wines at special occasions. When we blended the wines we are tasting right now, he was the one who moved them all into tank. My parents usually come in the summer, right before harvest, and that’s when I bottle, so my dad’s always working with me in the cellar when they’re here. He’s 74 years old and he works the bottling line! He never complains; he loves it and is a great help. So he’s had his hands in these wines.”

Both brothers seem to have a strong sense of who they are at relatively young ages. I ask Ernst about this and he tells me, “The politics and the gossip in the wine business can be hard, but you can choose to remove yourself from that stuff. I like solitude. I like quiet. I eat lunch alone probably every day and I like that. I don’t feel like I need to be a part of any group to make it in the wine business. I want my brand to be about making good wines, and nothing else. From early on, it was very important for me to have a certain identity as a winemaker, to establish a certain style that I like and really focus on that. I resolved early on not to follow trends or agendas. I wanted to have something that is mine – a certain style that I like and that I will embrace throughout my life. These are the types of wines I’ll make until I die. Some people might not like them and that’s fine. I’m making them more for myself and the people who get it, who understand this approach.” And what is his approach? 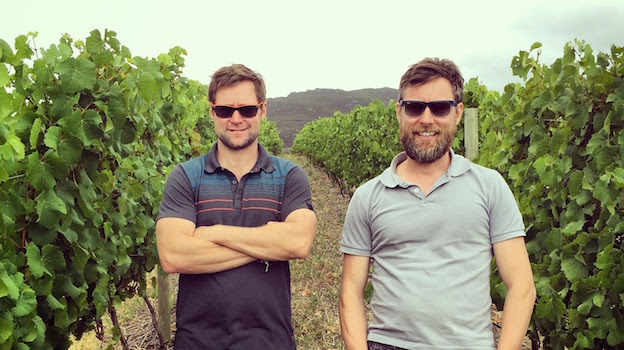 As a consumer, I’ve tasted Ernst’s wines from various popular sites in Santa Barbara County – vineyards that sell fruit to many other esteemed winemakers. Time and again, Ernst’s wines emerge as some of the more naturally balanced, invigorating and classic renditions.

Both brothers maintain a level head by seeking balance in their own daily lives through the pursuit of other interests. Hannes is an avid mountain biker, but enjoys the ocean and safaris – and music, from contemporary to classical. “I have a soft spot for choral music. I like to sing in choirs.”

When he’s not working in the cellar, Ernst enjoys spending time with his 2-year-old daughter. “When we drive in the vineyards at harvest, she will say, ‘Elsa. Grapes!’ I’ll pull over and pick a cluster for her and she’ll eat each grape, one by one. And if you ask her what her daddy does, she says ‘wine’.” Does he hope she’ll follow in his footsteps and become a winemaker? “It’s definitely in the back of my mind. I always have her smell wine. I would love for her to see wine the way I do, as the expression of something meaningful. For me, it’s about more than a job or making money. It’s deeply personal. Hopefully I can instill that in her. But you never know. She might want to become a princess! Or a surfer!”

Invariably, I ask the brothers if they ever plan to collaborate and produce a wine together. “We are starting a winemaking project in South Africa based on Syrah,” Ernst says. “Our goal is to work closely together. I trust his winemaking. He trusts mine. We want to streamline everything we do – the wines we make, the markets we sell in, the way we work together. We value the same things in life, so we work well together. This business has to be sustainable for us. It needs to be lasting. It needs to be a real, authentic pursuit, and not for my ego or his ego. We like that feeling you get inside knowing that you’re satisfied with what you’ve done and what you’re doing. We like keeping our eyes on the Big Picture.” 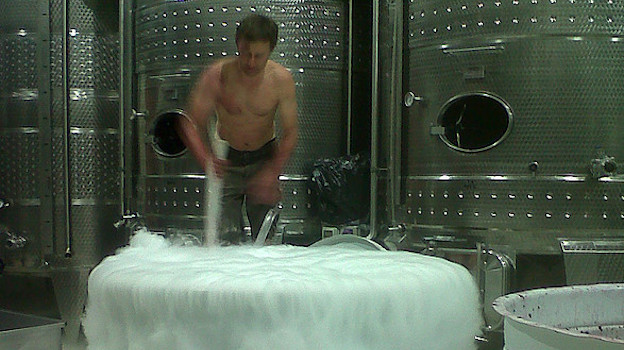 Hannes in the cellar

Of Springsteen and Steen: A Chat with Leo Steen Hansen

Diversity is the Fabric: A Chat with Winemaker Enrico Maria Bertoz

Ka-Ching: Filling up at The Station: A Chat with Jenna Congdon

Standing in the Uplight: A Conversation with Winemaker Chris Bratcher of Bratcher Vineyards

Through the Fire: Sitting Down with Manfred and Elaine Krankl

In the Kind of World Where We Belong: An Interview with Drake Whitcraft