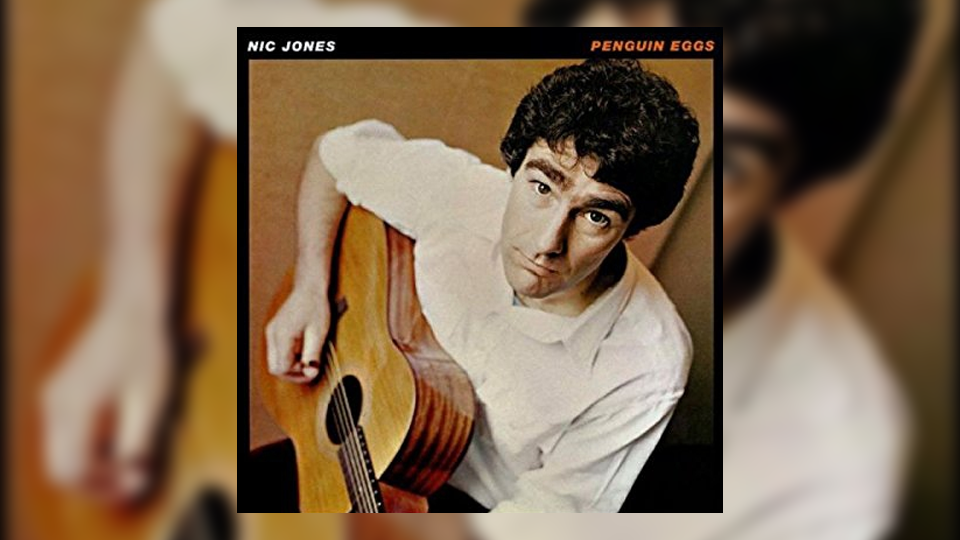 This second edition of “Crate Digging” features a remarkable figure in music and an even more equally remarkable backstory. You might not have heard of Nic Jones, but those who have are surely nodding in agreement. I was introduced to him only five months ago courtesy of an article in “Record Collector” magazine. In fact, “Penguin Eggs” was earmarked for the inaugural Crate Digging piece, but it took me a few months to locate a long-deleted vinyl pressing at a record fair.

Nic Jones was born in Orpington, Kent in 1947 and raised in Essex. He was part of a folk group “The Halliard” in the late Sixties as vocalist, guitarist and on fiddle. Though by his own admission, Jones was more drawn to rock ‘n roll, even to this day Jones remains rather ambivalent towards the genre of music where he is considered a legend. During the Seventies he recorded five albums for the Trailer label under his own name and established a small but loyal fanbase. Like many folk singers of the time, he visited the sound archives in Cecil Sharp House, a library of traditional English folk songs and lyrics, using this source material for his own interpretations, sometimes rearranging them so dramatically that they bore little semblance to the original. Jones downplayed his guitar technique, yet it was certainly influential. Inspired by Martin Carthy, he gradually incorporated open-tuning in C and G, loosening the tension in the bass strings and muffling them with his thumb, plucking hard and lifting the strings outwards so that they snapped back upon the fingerboard, incorporating flamenco and classical stylings, all to create a distinctive sound. Nevertheless, Jones has always maintained that he is a singer rather than a guitarist. His voice has deep timbre, like Sandy Denny’s, imbued with agelessness, sounding both contemporary and as if singing from time long ago. There has always been a nonchalant, recalcitrant side to his personality. Jones once famously turned his back to the audience when they were too noisy. On another occasion, he asked his manager in the middle of a concert how long he had to play. “As long as you want,” came the reply. Jones promptly walked off stage.

In 1980 Jones released “Penguin Eggs” to wide acclaim. In an Observer newspaper poll, it was placed in the Top 100 albums of all time next to “Let It Bleed” and “Hunky Dory”, another critics’ poll voted it the second best English folk album of all time behind “Liege & Leaf”. Its opening track “Canadee-I-O” is his most famous and revered song, an instant folk standard narrating a maritime tale of a “fair and handsome” girl that stowaways on a ship to follow her paramour, only to fall in love with the captain. The guitar playing is exquisite, dare I say magical. It was covered/ruined by Bob Dylan, although Mr. Zimmerman rather shamelessly “forgot” to credit its writer. Success never translated into fame and arena tours. Folk was an underground, anachronistic and often ridiculed type of music dichotomous to the pervasive futuristic sound of synthesisers. In order to support his family, Jones drove himself the length and breadth of the country performing to small audiences, often returning exhausted to his Cambridge home late at night.

In February 1982 as he neared home, Jones drove headlong into a fully loaded lorry pulling out of the brickworks; his car smashed to smithereens, the driver faring no better. He broke almost every bone in his body and suffered severe neurological damage, locked in a deep coma. To give you an idea of the impact, surgeons found one of his teeth inside his lung. The fact that he survived was remarkable in itself. His wife, Julia, remained at his bedside and asked fans to send cassettes of gigs, hoping it would help him regain consciousness. It worked, and some of those recordings ultimately formed a well-received album. Jones remained in hospital for eight months and was discharged with the remainder of his lifetime dedicated to patching himself together. He lost coordination on the right-hand side of his body, which meant he would have to relearn guitar, though his smashed hand and finger meant he could never recapture his skill and never grace the stage with that instrument again.

Jones vanished from the music scene but his reputation simmered on. A new generation of folk artists in the Nineties constantly hailed Nic Jones and in particular, "Penguin Eggs", as an inspiration. Not unlike Nick Drake, his tragically curtailed career enhanced the myth surrounding his name, the difference being that unlike Drake, Jones was alive. Then in 2010, at the “In Search of Nic Jones” tribute concert in Sidmouth, to the audience’s disbelief a former bandmate encouraged Nic Jones to come onstage and sing the choruses of a couple of songs. It was the catalyst for his tentative return and their followed a handful of gigs, lyrics written out for him, his son accompanying him on guitar. In a twist of fate, that guitar was the same “Fylde Oberon” that had rested on the back seat of his car that fateful night in February 1982, the instrument having miraculously suffered just a broken neck.

Newspaper articles predictably hailed Nic Jones as the man who against all odds, came back from the dead to perform once more. A BBC4 documentary on Jones in 2013 fuelled interest further (available on YouTube) and is well worth watching. Since then, Nic Jones himself has been relatively quiet, one hopes enjoying rural life down in Devon, though he was interviewed for the aforementioned Record Collector piece. Despite constantly downplaying his own skill and professing far more interest in groups such as Radiohead rather than his folk contemporaries, his reputation seems to grow each year. It explains why original albums from the Seventies such as “From The Devil To A Stranger” and ”The Noah’s Ark Trap” now reach three-figure sums...if you can find an elusive copy. Penguin Eggs is easier to track down and currently the only one available on streaming services, although needless to say, only on vinyl does it sound magical, where you can hear the intricacies of his playing. No, it’s not the kind of music for everyone. His is a raw and intimate kind of folk music that probably does not translate as say, the warmer sound of Fotheringay. Yet his songs continue to evoke vivid images of a time long ago, his voice imbued with something pastoral and mystical.

"Penguin Eggs" was released in 1980, a tricky year matching wine since it was rubbish in Bordeaux and most places. However, Burgundy can be surprisingly good if you know where to look. I have fond memories of a 1980 Romanée-Saint-Vivant from Domaine Hudelot-Noëllat that I brought to a La Paulée one year. It’s impossible to find, so instead, listen to Nic Jones’s “Canadee-I-O” with some Canadian Ice Wine.