I was fortunate to enjoy dozens of fantastic meals, casual as well as over-the-top, indulgent and gastronomic, as well as literally hundreds of superb wines, ranging from remarkable values to rarities this year, many of which will likely never pass my lips again. Choosing which ones were “best” is, frankly, impossible but here is a highly pared down selection of those meals and wines that made some of the strongest and most lasting impressions on me in 2018.

In the case of the meals, all three of these restaurants struck the right chord for their simplicity, ingredient quality and, perhaps most important, their respect for tradition. The wine part was an even more difficult choice given the sheer number of them that I tasted as well as drank over the last 12 months. I decided to boil it down to a handful of those wines that lingered in my memory for weeks and even months after I had them. Rarity played a small part, but after doing this professionally for 30 years now, scarcity is less impressive for me these days than it was early on. Company always plays a big part, and I’m fortunate to have a number of knowledgeable, passionate and generous colleagues and friends around the world with whom I’m able to indulge in amazing wines such as those mentioned here. 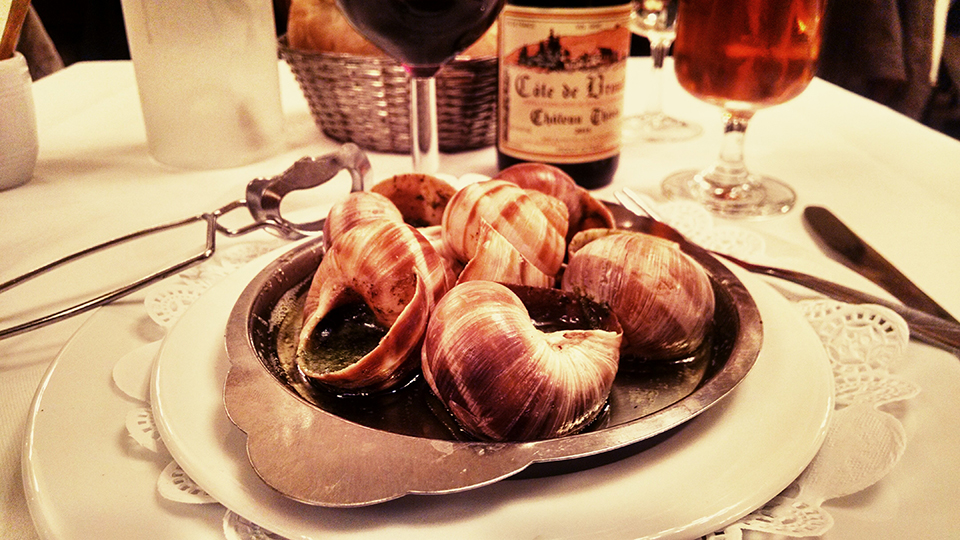 Brasserie Georges has been serving classic Lyonnais cuisine and their own, brewed-on-site beers to huge crowds in a cavernous space across from the Perrache train station since 1836. It’s an endlessly bustling scene, with 800 seats that are mostly filled from 11:30 in the morning until 11:00 at night, seven days a week. On my three visits in 2018, I indulged in large escargots served in a ridiculous quantity of butter, garlic and parsley; decadent marrow bones; old-school quenelle de brochet in a classic sauce Nantua; an indulgent take on tournedos Rossini, with a generous slice of seared foie gras and a duck breast standing in for the traditional beef filet; and the superb saucisson Pistaché from Mâcon’s venerable Charcuterie Bobosse. A well-aged Saint-Marcellin, along with a healthy dose of Chartreuse, closes things out nicely, as does their rendition of île flottante. The small wine list offers a tight selection of mostly regional wines at fantastic prices, like Château Thivin’s special cuvées of Cote-de-Brouilly or Louis-Claude Desvignes’s outstanding Morgons for a measly €25. High rollers would be especially thrilled to find all three of Guigal’s La Côte-Rôties on offer at the ridiculously low price, relatively speaking, of €250 on my last visit. 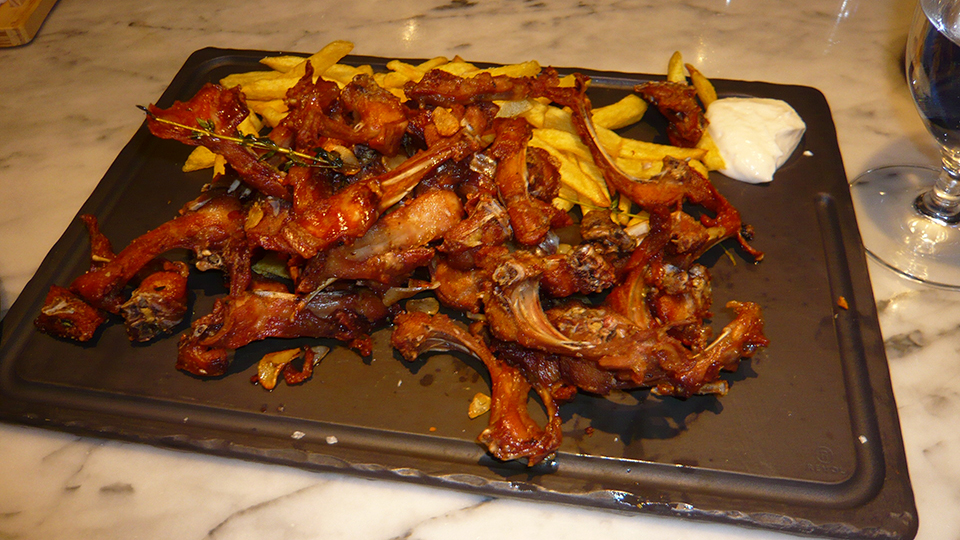 Taberna Laredo is my favorite Madrid wine bar, with a list that’s packed with bottles from many of Europe’s most esteemed and sought-after producers. There’s a particular emphasis on Champagne, and their Burgundy selection is astounding. Spain is well-represented as well, with special attention given to small, artisanal bodegas. Mostly simple dishes, made with impeccable ingredients, are served. This summer, at the always-packed bar, I stuck to what has become a basic routine: pan con tomate, made with fresh bread and peak-of-the-season tomatoes; amazing cured anchovies from Cantabria; and what’s probably Laredo’s signature dish, fried rabbit ribs with herb-dusted French fries. Those ribs are at once impossibly crispy and insanely juicy, and the fries aren’t far behind. Add a steady flow of vibrant, Garnacha-based local wines from top Vinos de Madrid producers like Comando G and Bodega Bernabeleva and you’ve got a fantastic evening in Madrid. 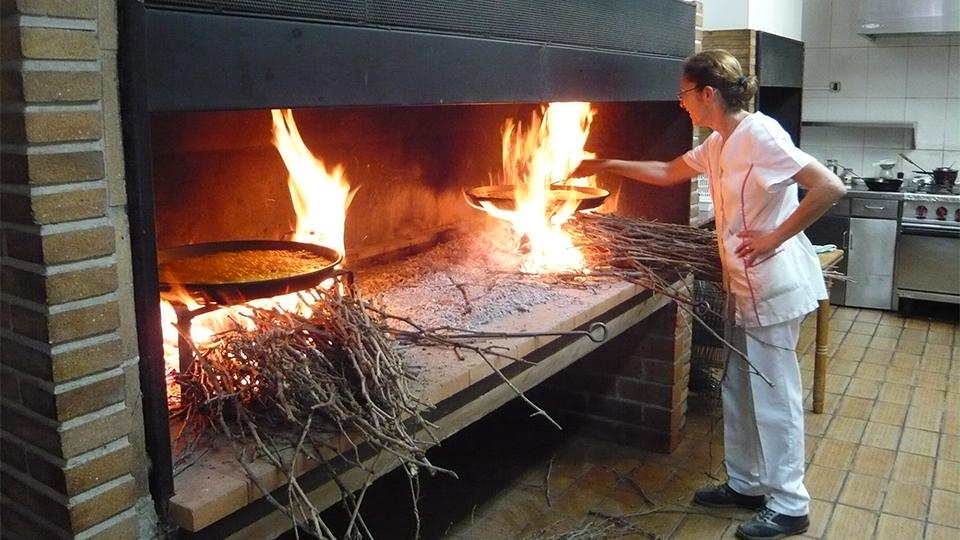 Restaurante Paco Gandía Many well-traveled Spanish gourmands consider Josefa Navarra’s paella at Paco Gandía to be the gold standard. The restaurant’s location, in the relatively remote town of Pinoso, in the also somewhat removed Alicante region, doesn’t stop visitors from making the four-hour pilgrimage from Madrid to indulge in their rendition of the area’s classic version of Spain’s iconic dish, made with rabbit and snails. It’s more than worth the drive. After a couple of gin and tonics (an obsession of Josefa’s husband, Paco), I was almost embarrassed at how much I was able to eat at my lunch there this summer. Almost. The paella went wonderfully with the young, flamboyantly fruity 2015 Bodegas El Nido Clio and was followed by another selection from Paco’s impressive gin stash. And, no, I wasn’t driving. 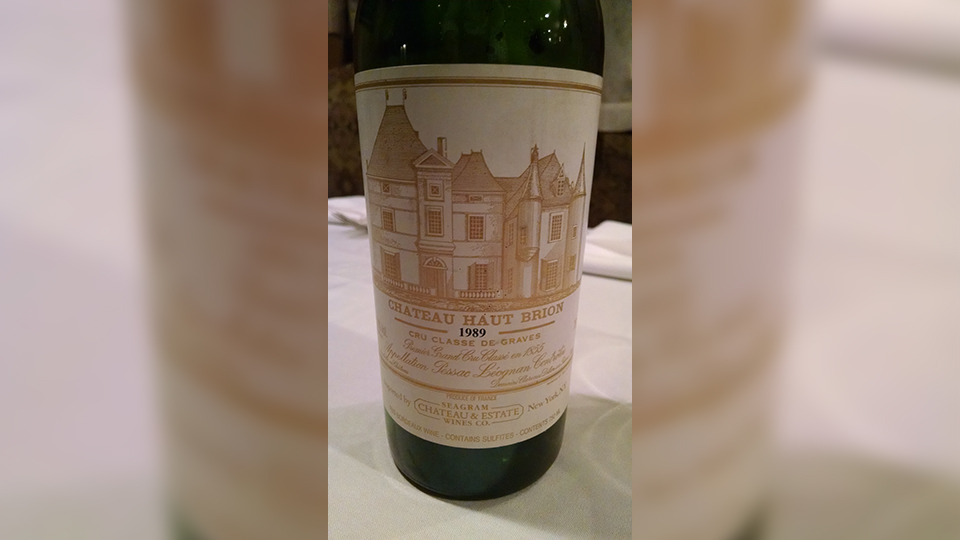 1989 Haut Brion I’ve been following this wine since I first tasted it from barrel in the summer of 1990, and it has always been an amazing wine and one of the best examples of this remarkable vintage. This particular bottle, which I helped to drink alongside a superb, dry-aged prime porterhouse at one of the New York City area’s best steakhouses, Rothmann’s on Long Island, might have been the best I’ve ever had. The textbook iron, tobacco and cigar box Haut-Brion character was there in abundance, but this time there was also an almost Burgundian laciness and buoyancy to the wine that I’ve not experienced before. Even at almost 30 years old, it still has a long life ahead of it, but based on this bottle I wouldn’t begrudge anyone opting to drink it right now. 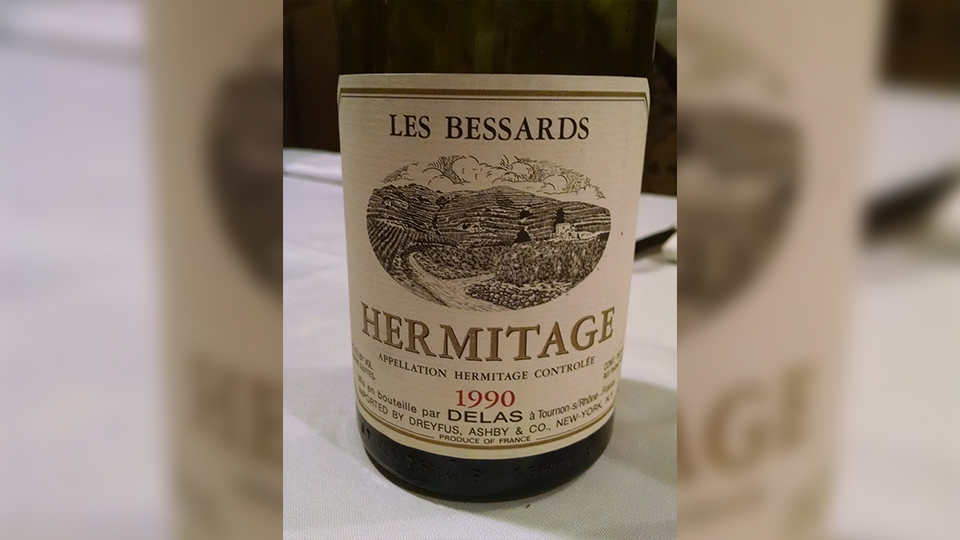 1990 Delas Frères Hermitage Les Bessards Given the small production of most high-end northern Rhône wines, it isn’t that often that one gets the chance to drink one at full maturity, and this Hermitage was a remarkable example of just how complex and captivating this appellation’s wines, from a great year like 1990, can be at their peak, showing intense, pure dark fruit and floral character, mineral and spice nuances and Syrah’s typical smokiness. Delas owns a relatively massive seven hectares of this, one of the Hermitage hill’s prime vineyards, so finding younger versions of this wine (current examples are consistently superb) should be relatively easy. 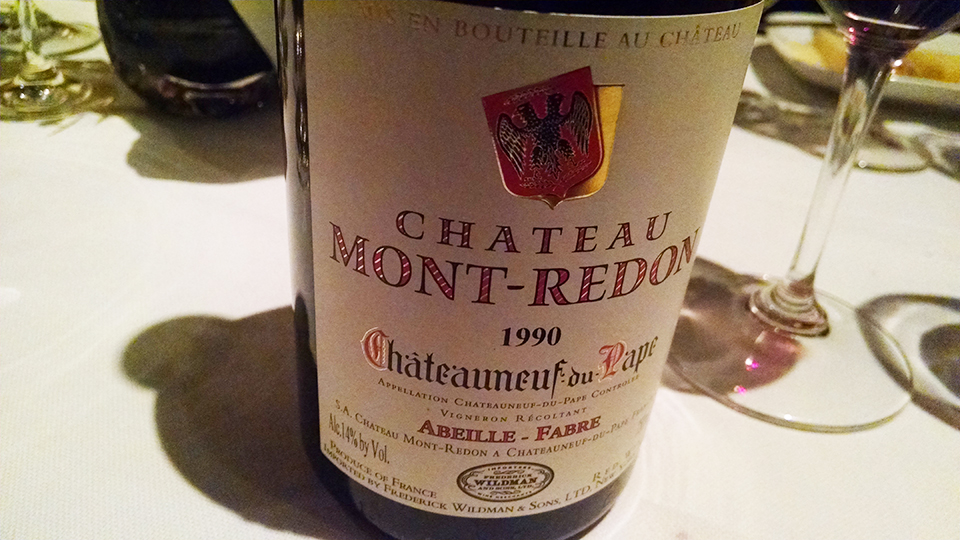 1990 Château Mont-Redon Châteauneuf-du-Pape At 28 years of age, this is a lovely example of traditional Châteauneuf-du-Pape that’s drinking in peak form, with a highly complex bouquet that evokes ripe red fruits, pungent flowers and succulent herbs. Weighty yet energetic as well, with seamless texture and a strikingly long, focused finish, it reminded me that a great Châteauneuf, from a great vintage like 1990 and a reliable, traditionalist producer such as Mont-Redon, truly rewards the patient wine lover.

1961 R. Lopez de Heredia Rioja Viña Tondonia A seemingly immortal wine, the ’61 Tondonia, which I have been fortunate to drink at least a half-dozen times, comes across as a hypothetical blend of a high-end Paulliac and a graceful Côte d’Or Burgundy. Showing intense, finely detailed red fruit, floral, tobacco and spice character, plus cedary oak and smoky mineral nuances and a seemingly weightless quality, this bottle was a glorious example of traditional Rioja at its best. Served at the always-excellent Bâtard, in New York City, this was perhaps the best bottle I’ve yet enjoyed. 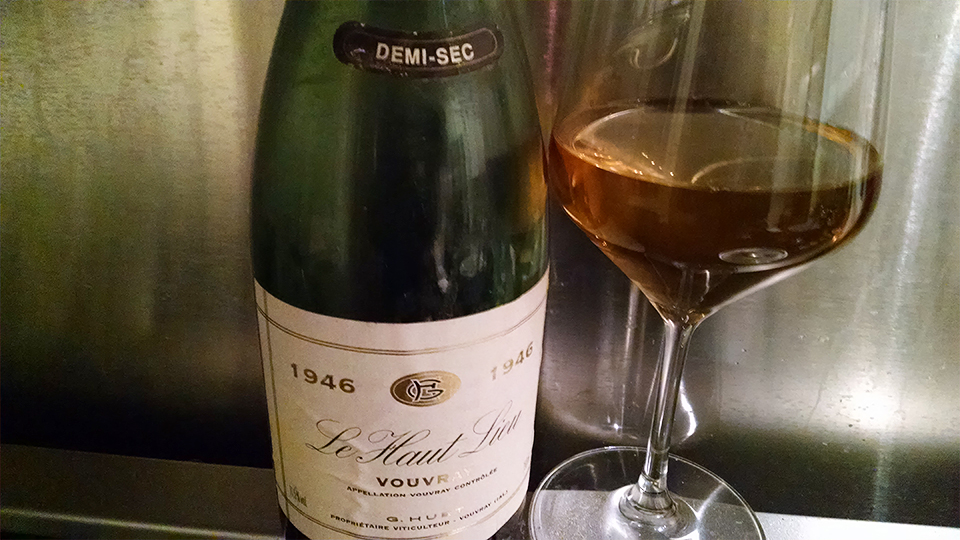 1946 G. Huet Vouvray Le Haut Lieu Demi-Sec The legendary Gaston Huet was a prisoner for the last five years of World War II, and while his 1945s, which he made upon gaining his freedom, are justly renowned, his 1946s are the result of his first full postwar vintage. While obviously at full maturity, this gorgeous wine is still expressing sappy, gently sweet orchard and pit fruit character, along with hints of honey, beeswax and dried flowers that unfurl over time. Finding another one will be next to impossible, which made this one especially poignant.

A list like this one is highly personal and, frankly, in no way easy to construct. While I could have named countless other wines I drank and restaurants that I was fortunate enough to visit in 2018 – definitely ones more famous, lusted-after, envy-inducing and expensive than those that I note here – these are the experiences that resonated the strongest for me. I’m hopeful that 2019 will provide at least as many memorable bottles and meals, if not more.